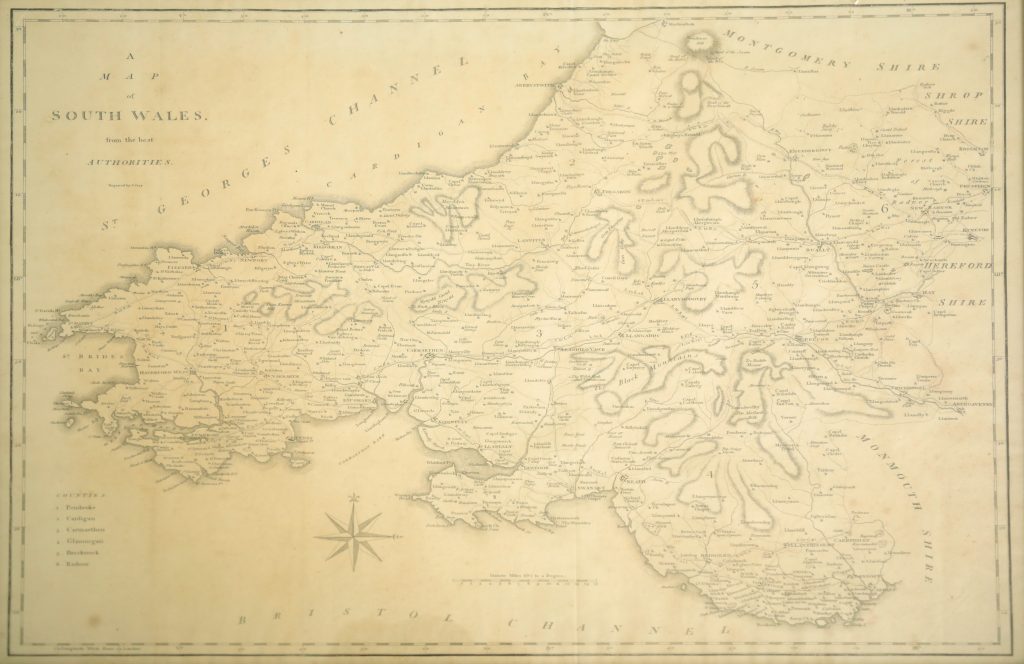 St David was part of the original Celtic Church spreading during the 4th, 5th, 6th centuries from Western Europe up the Western sea lanes of Britain and the Irish Coast.

These sea lanes have been in existence for at least 5000 years and possibly earlier including the stone age connections, the colonisation of Western Europe and used extensively through the spread of Christianity along the fringes of Western Europe. These sea lanes connected the Mediterranean, Bay of Biscay, Brittany, Cornwall, Wales, Ireland, Isle of Man, Scotland, Orkney and Shetland.  The connections have been traced by examinations of graves stones, axes and pottery.

In the Iron age particularly (from the 6th Century BC onwards) they were extremely important to allow the Cornish tin trade to flourish with tin exports to much of Western Europe as a part of the metal development of the bronze and iron ages.

For a period with the Roman invasion of France, and subsequently Britain, the shipping movements declined.  Julius Caesar smashed the power of the Veneti tribe in Gaul and for several centuries access to Britain was across the narrow English Channel Seas.

With the withdrawal of Roman power the opportunity arose to open up the Western sea lanes and as a result South West Wales has a profusion of early Christian Monuments and Ogham and early Christian Inscribed stones.

The Christian message come from the Eastern Mediterranean and by 400 AD had reached Southern France.  One of the principle monastic settlements was located at Tours under Bishop Martin, himself born in Asia Minor.

Various Irish, Gallo Roman, Christian refugees from Britain combined to cause the Celtic Church to develop from approximately 400 AD onwards.

So who exactly was David and what did he do?

He was born on a unknown date and died either on 1st March 589 or 601.  The reason why we have St David’s Day is because he is reputed to have died on the 1st March.

We have very little documentary evidence of his life as a person, but a reference in the Martyrolgoy of Tallaght an Irish Document of the 8th Century.  There is also Llanddewi Brefi Church and the research by Edward Llwyd around 1690.

The stone which he discovered had a Latin inscription:-

The overall meaning of the inscription is “here lies Idnert the son of Jacob, killed while defending the Church of the Holy David from despoliation.”

However, to find some serious documentary evidence we have to jump 500 years to approximately 1100 when Rhydgyfarch son of Bishop Sulien and himself, Bishop of St David’s’ from 1088 to 1096 gave a medieval description of St David’s life.

We also have a very similar description of the writings of Gerald Cambrensis the Grandson of Nest born in Manorbier Castle who never became Bishop of St David’s.

From the documentation, we have reference to him being the Grandson or Great Grandson of Cunedda, King of North Wales.  His father was Sant or Sandde, a hunting warrior and his mother, Non an inhabitant of the St David’s area.  Whether a marriage took place or whether the birth of David was caused by uninvited interference with his mother, is not known.  There are references to storms and unexplained events at the time of his birth, but serious evidence is non-existent.

There was no doubt he was educated and this might explain his connections to a Chieftain or influential family.  Again, according to legend the education took place at Henfynyw, south of Aberaeron, and he was baptised by St Elvis of Munster.

He founded a religious community based on a simple and austere life in the Valley of the River Alun at what is now St David’s.  The name of this valley in Welsh is Glyn Rhosyn (the valley of the moor), whereas medieval Latin has given it the name Vallis Rosina and a connection with roses as a result of corruption of the original Welsh terminology.  Rumour has it that he followed an austere life following the style of the dessert fathers, water and vegetable were his food and much time was spent working and teaching, and in contemplation.

Throughout Wales there are 50 churches dedicated to his name and he holds his place in the first Order of early Saints along with St Columba and St Patrick.  Among his followers where Teilo Illtyd Cadoc and others.

There is reference to a major religious meeting at Llanddewi Brefi and legends that at this meeting he placed a handkerchief which then rose up to allow him to address the meeting and a white dove settled on his shoulder.  There are further legends that his settlement in St David’s was disputed by the Irish Chieftain Boia, from a fortress to the west of St David’s (Clegyr Boia).  These were non Christian inhabitants in the area who tried by various means to either remove or influence David and his followers including sending naked women to dance in front of them.

The legends also speak of thunderstorms and lightning affecting Boia and his camp and he apparently met his death from further Irish Chieftain called Lyski, (Porthliski).

There is further reference to a journey from St David’s to Jerusalem with two companions.  In the light of what we know of the turbulent times, difficult passages, lack of transport of the 6th Century, it is extremely hard to conceive that such a journey was undertaken and with a successful return.  It appears that prior to David’s lifetime, St Patrick travelled through Europe and visited Rome, but even in its state of decline the Roman Empire would still have given some means of protection and transport that probably disappeared with the withdrawal of Roman occupation from Britain, France, etc.

However, the following of David undoubtedly grew over the centuries and the cult of pilgrimage must have established itself and become important, otherwise, William the Conqueror in 1081 would not have visited St David’s.  However, he did so at a time when land communications would have hardly existed and yet there must have been pilgrim ways which allowed him to make the journey unmolested.

The see of St David’s developed over the centuries and was by far the largest area of influence and attachment to a Welsh Cathedral.  It is possible that the original grant of lands to the Bishop of St David’s, particularly in Pembrokeshire was the area of Pebidiog, i.e., from St David’s to Fishguard and also the Manor of Lamphey both given to the diocese by Rhys ap Tewdwr, possibly in the 1080’s.

However, change came with the Norman Kings and the imposition by Henry I of a Norman Bishop Bernard to the see of St David’s.  However, Bishop Bernard was in many ways a busy man and good administrator.  He visited Rome in 1120 and according to authorities at that time, Pope Callixtus II, canonised David with the title Saint David and also commented that two pilgrimages to St David’s were worth one to Rome.  As a result there is no doubt that the cult of pilgrimage to St David’s grew.  A stone shrine and canopy was provided under the Episcopate of Bishop Carew around 1275.  The Cathedral had been started a century earlier by Peter de Leia from 1181 onwards and the Bishop Palace dates from 1330 onwards under Bishop Henry de Gower.

To complete the picture, there are some thoughts on emblems of the Saints Day, namely; leeks and daffodils.  The leek appears by long tradition to be a signal of Welsh Nationality and it may date from 633AD and the battle of Heathfield when the Princes of North Wales and Mercia fought against Edwin of Northumbria.  The leeks in the Welsh soldiers’ caps distinguish them from other opposing forces on the battle field.

There is also a connection in Welsh through the name for a leek; “Cenhenin” and the name in welsh for a daffodil “Cenhenin Pedr”.

In Shakespeare’s Henry V, there is further reference to leeks and in particular Pistol talking to King Henry about Fluellyn and saying, “Tell him I’ll knock his leek from off his pate on St Davy’s Day.”

The daffodil may well have arisen because Welsh Ladies preferred the pleasant smell of the daffodil on their clothes to that of leeks.

To end, I close with two quotations, one from Basil Jones and Edward Freeman’s Book on Saint David’s Cathedral of 1855 and the other from James Nicholas, former Headmaster of Crymych School.

St David’s standing erect amid desolation, alike in its fabric and its establishment, decayed but not dead, neglected but never entirely forsaken, still remaining in the corner of the world with its services uninterrupted in the coldest times, its ecclesiastical establishment comparatively untouched, is, more than any other spot, a link between the present and the past.  Ruin and desolation speak of what has been, but not ruin and desolation alone; it still lives its old life, however feebly; the light first kindled by its original patriarch may have often shone but feebly in the darkness, may even now only glimmer in the socket, but it still remains one and un-extinguished; it has never at any moment required to be rekindled from any new or extraneous source. (Written in 1850).