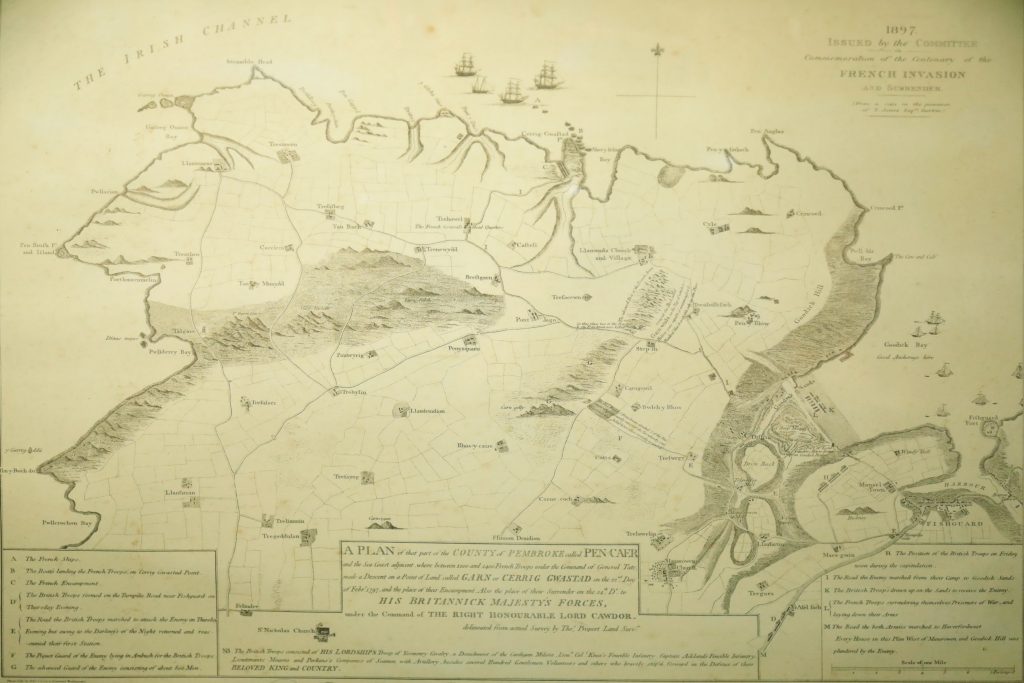 Early in 1993 Elizabeth Cramp R.W.S. a painter resident in Fishguard accepted the commission to design a 100 foot long by 20 inches deep (3048cm x 50.8cm) embroidery, along the lines of the Bayeux Tapestry, depicting the 1797 Invasion of West Wales by the French.  This was a community project part of the celebrations of the bicentenary of the invasion in 1997.  Experienced embroiderers were recruited locally and Rozanne Hawksley, Eirian Short and Audrey Walker, all former lecturers in the Embroidery Department at Goldsmiths’ College, acted as the coordinators and advisers.

Elizabeth researched the history of the invasion, sketched the invasion landmarks, studied the local costumes and the military uniforms of the period and over a period of two months had designed thirty-seven scenes to depict the story. These original images were drawn, painted, traced, carbon-transferred and inked on the unbleached cotton fabric ready for stitching with crewel wools.  There were 178 shades of wool used and these were matched to every detail of the original painting and colour charts and instructions were written for every panel.

All the local embroiderers who joined the project were women ranging in age from thirty to eighty-two and by February 1994 seventy embroiderers were eager to make a start. It was not practical to undertake the embroidery on a continuous length of fabric so it was done on manageable sized panels which would then be joined together. The thirty-seven divisions of the embroidery varied in length from nineteen inches to forty-six inches.  The embroiderers organised themselves into small groups who worked together in their own homes.  Bringing the separate panels together was a tricky part of the project as the adjacent parts of the design had to be perfectly matched and the seams were sewn with tiny hand stitches.  By the Autumn of 1996 the Tapestry was in one piece ready for the borders and lining to be added and it was unveiled for public display on February 22nd 1997 – the bicentenary of the date when the French forces landed at Carreg Wasted.

The Last Invasion Tapestry was displayed in St Mary’s Church Hall for several years before moving in 2007 to its current home in the purpose built gallery in Fishguard Library in the Town Hall.