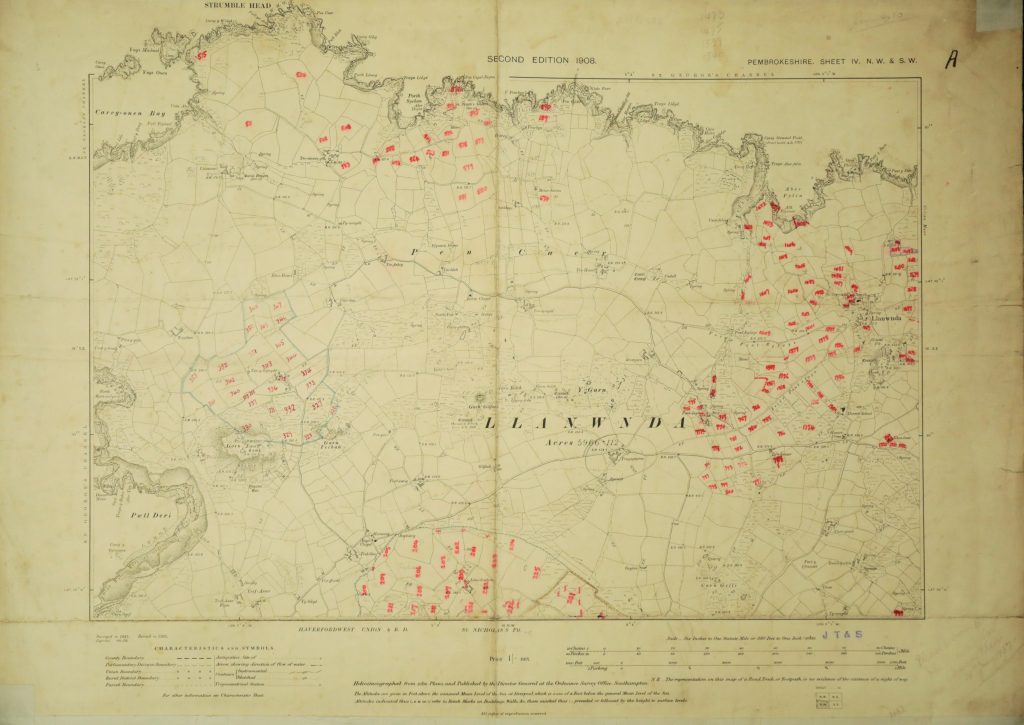 Standing on its windswept headland, overlooking the Irish Sea, the ancient church of Llanwnda has been hallowed by the prayers of the faithful for some fifteen hundred years, in fact, ever since its saintly founder, Gwyndaf, established a church on the site in the sixth century.

Tradition relates that Gwyndaf was of Breton aristocratic stock, being the son of Emyr Llydaw of Aman Ddu. He supposedly had links with the great Welsh monastic teaching centres at Caerleon and Llantwit Major, but in common with a number of Celtic saints, he was not celibate and he married Gwenonwy who bore him two children, Hywyn and Meugan. Despite his holy status, he was meant to be rather a cantankerous individual, but that does not seem to have sullied his reputation as he is also been honoured at another Llanwnda, which lies near Caernarfon, and this might explain why he is reputedly buried on Bardsey Island.

Nothing remains of the founder’s original structure, but a number of pre-Norman early Christian inscribed stones have survived, the most interesting built into the fabric of the present structure, possibly during the 1882 restoration undertaken by E. H. Lingen Barker. The most fascinating can be seen built into the outside east wall of the south transept and it consists of a series of carefully carved lines which produces the face of a female. Could it be a representation of the Virgin Mary? It is believed to date from the seventh – ninth century. Also worthy of note is the stone to be found in the outside south wall of the chancel which bears the incised double-outline of a cross, whilst another, on the outside east chancel wall has a Latin cross, but with a triple border at the top, perhaps suggestive of the titulus placed above the cross of Christ at his crucifixion.

Despite the various restorations which the basically cruciform church has undergone over the centuries, the remaining structure is still largely medieval. From the outside, can be seen the western double bellcote and the sanctus bellcote, which is a rare survivor in these parts. The vaulted porch, with its ‘leper’ window, leads into the nave where the twelfth century font can be seen. Surrounding the font on three sides can be seen the stone bench, where, are according to tradition the old and the weak went to sit, thereby giving rise to the expression ‘going to the wall.’. Medieval roof beams still span sections of the nave and on one can be seen a carved tonsured priest head. (The church’s most famous, if absentee incumbent, was the chronicler of the Middle Ages, Giraldus Cambrensis). High up in the north wall can be found the doorway which orginally led to the rood loft, entrance being gained by climbing a narrow flight of stairs built into the thickness of the wall and entered from the north transept. It is probable that both transepts terminated in chapels. During the 2002/3 restoration part of a fragmented painted inscription was uncovered in the south aisle.

Inevitably, with a church of this age, a great deal of history has accrued over the centuries. Arguably, the church’s most momentous episode happened in February 1797 when a small French force landed nearby in an event known as the ‘Last Invasion of Britain’. The church was entered and despoiled: the prayer books and registers were reputedly burnt, the 1690 chalice was stolen, but later retrieved and, according to local tradition, many pages were torn out of the Welsh Parry Bible in order to light fires. Restorative work has recently been carried out on the Bible in the recent past in order to preserve it for future generations.

The restored well of St. Gwyndaf can be seen near the entrance to the church.