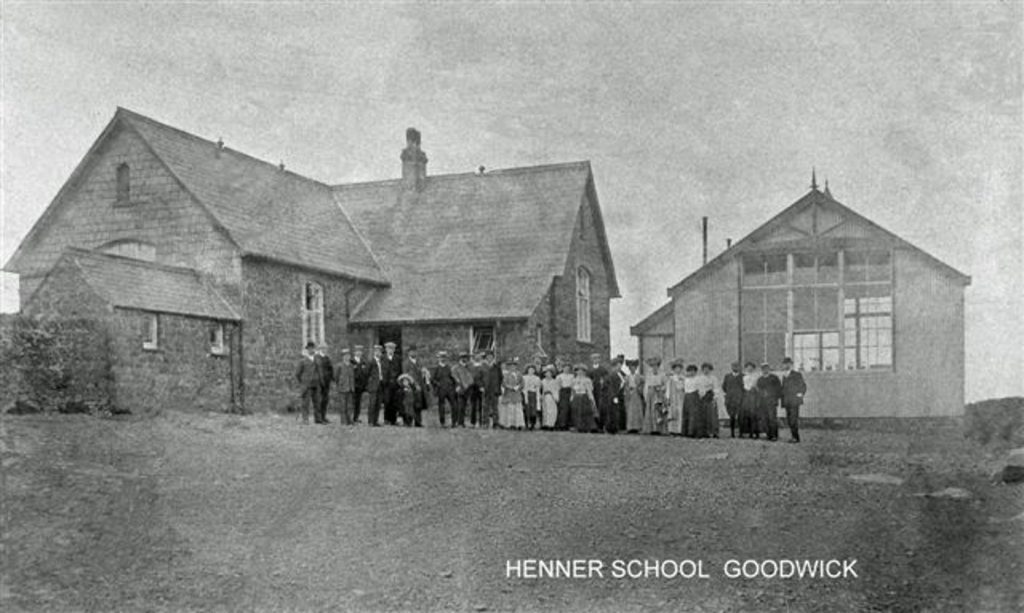 Some educational facilities existed in Pembrokeshire from the 16th century onwards.  These included the Cathedral grammar school at St. Davids and other grammar schools at Haverfordwest, Cardigan, Pembroke, Tenby and further afield at Carmarthen. There was also the opportunity for those who could afford it, to send their sons away to Bristol by ship for their education at a school.  However, the vast majority had few educational facilities.

The first schools which arrived in local areas were promoted by the Society for the Promotion of Christian Knowledge (SPCK) and Sir John Philipps of Picton Castle was a founder member of the society.  He was also connected through his sister called Margaret and married to Griffith Jones the rector of Llandowror, who started the Welsh circulating schools.  These circulating schools were eventually established all over Wales, but we have records that they were established at Llanwnda and St. Nicholas from 1740 onwards.  There are records of attendance at these schools at various dates from 1740 through to 1776.

In the early part of the 19th century, both National schools and British Education Societies established schools in rural areas.  The National schools were promoted by the Church of England and the British school societies were non-denominational and catered for children from non-conformist families.

In 1847 there was a report by the Royal Commission into the State of Education in Wales (1846-47), which was very critical of both national British and other schools in the Dewisland area from St Davids to Fishguard.  Out of the 21 parishes in this area, 12 had no educational facilities at all.  This 1847 report mentions three schools in Llanwnda parish, one a village school at Llanwnda village, another day school at Harmony chapel and a third day school in Goodwick.  We have to remember that these inspectors were monoglot English speakers from England whereas most of the children in the schools inspected were Welsh speaking.  This report gave the impression that most of the children were not achieving the standards that were expected of them.  The Welsh refer to this report as ‘Treason of the Blue Books’.

By 1871 local Henner school board was formed and by 1876 Henner school was opened.  The cost of building the school and the master’s house was £500. It was immediately a flourishing school designed for 120 children and by 1905 there were 140 children.

By 1909 overcrowding at Henner school had reached a crisis, because of the increase in population at Goodwick due to the railway development.  By May 1909 there were 308 children on the books at Henner school and as a result it was proposed to build a new school accommodating 350 children.  On the 11th November 1909 a report in the local paper the ‘County Echo’ stated that a plot of land had been purchased for £350 to build a new school.  On 11th August 1910 the same newspaper was able to announce that John Griffiths, Phillips and Thomas’s tender to build the school had been accepted.  Goodwick School was opened on May 9th 1912 by Mr. Bancroft, His Majesty’s Inspector of Schools for the district.  The new school had two separate areas – one for the Infants and the other for the Juniors.  The first headmaster was Mr Evan Anthony with Miss Gertrude Hopkins in charge of the Infants.  Goodwick School still continues today at the top of Goodwick hill in Stop and Call.  Today in 2021 there are 135 children on the registers, which are marked digitally online.  They are taught by 5 teachers who are assisted in the classrooms by teaching assistants.  Mr Jonathan Jones is the present headmaster at Goodwick School.

In St. Nicholas parish there was activity with the circulating schools and in the late 1840s a British school was held at Rhos y Caerau Independent Chapel.

In 1869 St. Nicholas national school was built largely from public subscription.  Children attended from St. Nicholas and Granston parishes and may be some from Llanwnda.  St Nicholas school continued until 1967.