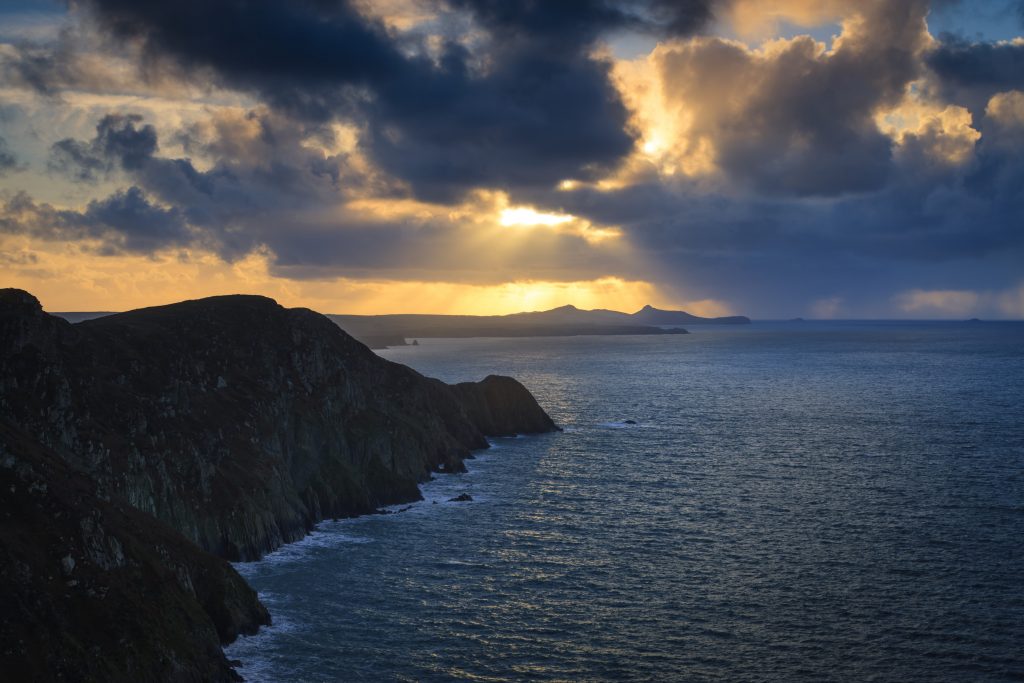 We know that in 1081 William the Conqueror himself visited St. David’s, presumably to understand the importance of St. David and no doubt to see part of the western extremity of his conquered land.  However, to say that Wales at that time was conquered would be incorrect.

In south west Wales for a period of William the Conqueror’s reign, Welsh Princes notably Rhys ap Tewdwr was the leader of the local Welsh people and Prince of Dyfed.  Prior to this he had spent time in both Brittany and Ireland.  In 1080 he returned from Ireland together with the assistance of Owen of Gwynedd and with their joint military forces took on the opposing Welsh Princes of Powys who were defeated at the battle of Mynydd Carn in 1081, fought in south Ceredigion. Rhys ap Tewdwr is recorded in the Doomsday Book 1086 paying tribute to King William.

This military victory at Mynnydd Carn and the tribute paid to King William gave Rhys the control of most of west Wales.  However, while opposing Norman forces in the area of Builth in 1093, he lost his life and the Norman invasion of Pembrokeshire and the adjoining areas of Ceredigion and Carmarthen commenced in earnest.

As a result of the appointment of Bishop Bernard in 1115 to the Cathedral at St. David’s, various changes took place and some churches using existing settlements arose.  As has been stated above, some of these churches were positioned in existing Christian settlements, Llanwnda and Mathry being good examples.

An understanding of the historical details of the early and medieval periods in Wales is difficult and covers a number of Welsh Princes and rulers who at various times controlled and opposed the Norman Conquest.

Soon after the Norman Conquest, William the Conqueror established important and powerful main gateways into Wales at Chester, Shrewsbury, Hereford and Gloucester.  It was understood by the important Knights who were given these centres of territory and influence that they could invade Wales and  take whatever lands they were able to conquer at the expense of the Welsh population. The original advances were made along the most natural routes following the north and south coastal plains and river valleys of the Severn, Usk, Wye and Dee.

For a period of some 12 years Rhys controlled west Wales and was left alone by King William and his son William II. However, all of this changed in 1093. Continued pressure by the Norman Knights from their bases on the Welsh boundary was opposed by the Welsh Princes including Rhys ap Tewdwr.

As a result  a chance encounter between Rhys ap Tewdwr and Norman troops near Builth Wells in 1093 Rhys was killed. This opened the flood gates of Norman penetration into west Wales. Some came along the coast via Cardiff, Swansea, Loughor, Llanstephan and Carmarthen.  The other main thrust came via the Montgomery family from Shrewsbury through Powys into Ceredigion and then southwards to end up at Pembroke where the original Pembroke Castle was founded by Arnulf of Montgomery in 1093.  The possessions of the Bishop of St. David’s at that time were left largely untouched and remained so with one exception under the Norman Bishops after 1115.  The one major exception is the Parish of Granston which will be referred to later.

As a result of the Norman invasion into south Pembrokeshire and a subsequent settlement of Fleming followers by the Norman Kings, the county divided into two sections, namely Welsh and English.  This divide pushed Welsh speaking peoples out of their original areas and further to the north of the county.  It is a divide which still remains today with the north of the county still a substantial Welsh speaking area.

At the start of the 1100s, the Norman Knight Robert FizMartin and a small band of followers landed in the Newport area and established themselves, thus founding a Norman dynasty in the north east of the county in the original Cantref of Cemaes.  This action resulted in the founding of the Barony of Cemaes, an ownership of part of the area, which still exists today.

From 1100 onwards whilst most of central and southern Pembrokeshire and major areas to the east forming the original territory of Deuhubarth, saw constant military activity between Norman forces and native Welsh people led by various Welsh Princes .,the north of Pembrokeshire area including Pencaer remained relatively free of this activity.

The one major change to the local area was the foundation around 1180 of the parish of Granston by removing part of St. Nicholas parish extending from the present day Llangloffan to Tresisillt Farm north of Aber Bach beach as a separate parish.  The name Granston is an English interpretation of Robert le Grand Baron of Cemaes at that time.  A new church with a Norman dedication to St. Katherine was founded in the same position as the current church and given in Welsh the name “Treopert”.  Translated this refers to “Roberts place.”, Furthermore, the church was not dedicated to St. David but held by the monastery of St. Dogmaels.  There still remains no major habitation surrounding this church, purely the two Granston farms and Tregwynt house and Tregwynt farm.  Since 1534 and may be earlier. the parish of Granston has been run with the parish of St. Nicholas.  Looking back one can see that it was a direct effort by Norman barons to curb part of the power of the Bishop of St. David’s by dividing the Bishops lands into two sections.