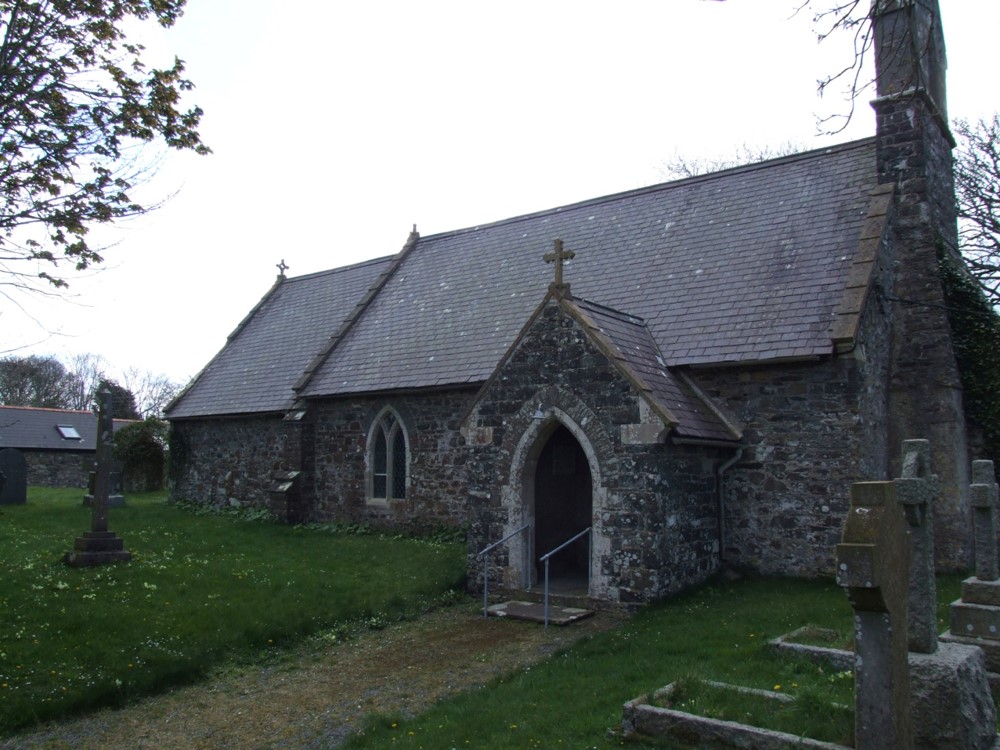 The parish church is situated in the hamlet of Llanwnda on the northern side of the Strumble Head Peninsular.  Dedicated to St. Gwyndaf, about whom little is known it has undoubtedly been a site of Christian religion probably since 5/6th century.  The present building dates from 1881..A full description is given by Reverend Richard Davies BA (Rector of Little Newcastle and former History teacher at Fishguard School).

Lying in Llanwnda parish and in the village of Goodwick is a large church building currently 2021 closed due to repairs required.  Before this church was built a galvanised iron structure stood on the site of the present church.  This building was replaced by the current building in the period from 1910 onwards.  The actual service of consecration was not held until 1922.  The church is dedicated to St. Peter and has seating for over 300 people.

Built on an ancient site with inscription relating to the 7th century and surrounded by an almost circular graveyard, the church lies in the centre of the village.  Restored in 1865 the building includes a small chancel, nave and vaulted south chapel. Records from 1287 show that the church, under its ancient name Ecclesia de Villa Camerarii ,  was  appropriated to the sub-chanter of St Davids Cathedral by Bishop Beck. The Welsh name is Tremarchog, denoting the presence of a knight or Bishop`s steward responsible for the Church and Bishop`s property in the area. The west end has a substantial strengthened belfry and bell housing.

In 2017/19 substantial repairs were carried out to the roof , internal ceiling, heating and lighting supported by grant funding from Heritage Lottery.

Reference has already been made to the parish of Granston and the founding of a church in the late 12th century.  The site and its grave yard enclosure lies alongside the road leading to Tregwynt and Abermawr.  The current building dates from 1877, being a plain church building in a very attractive setting.  The original dedication to St. Catherine remains.

An early Christian chapel with a dedication to St. Degan and by today it’s stone foundations barely visible and adjoining a natural rock outcrop named Cwn St. Degan.  Recorded by previous historians including Richard Fenton in his tour of Pembrokeshire (page 20).

The rise in popularity of the Non-Conformist Christian movement had a large effect on the north Pembrokeshire area.

This religious following resulted in the foundation of 6 chapels in the three parishes of Pencaer.

It is a fact that during the 18th and most of the 19th centuries the denominations of the non-conformist chapels were the major religious followings in the area.  Attendance on a regular weekly basis varied from 100 to 300 on Sundays together with large attendances at Sunday school.

By 2020 only Harmony chapel remains open, with Llangloffan and Rhos y Caerau closed.  Bethel (St. Nicholas) and Salem (Llanwnda parish) have both been sold by the denominations.