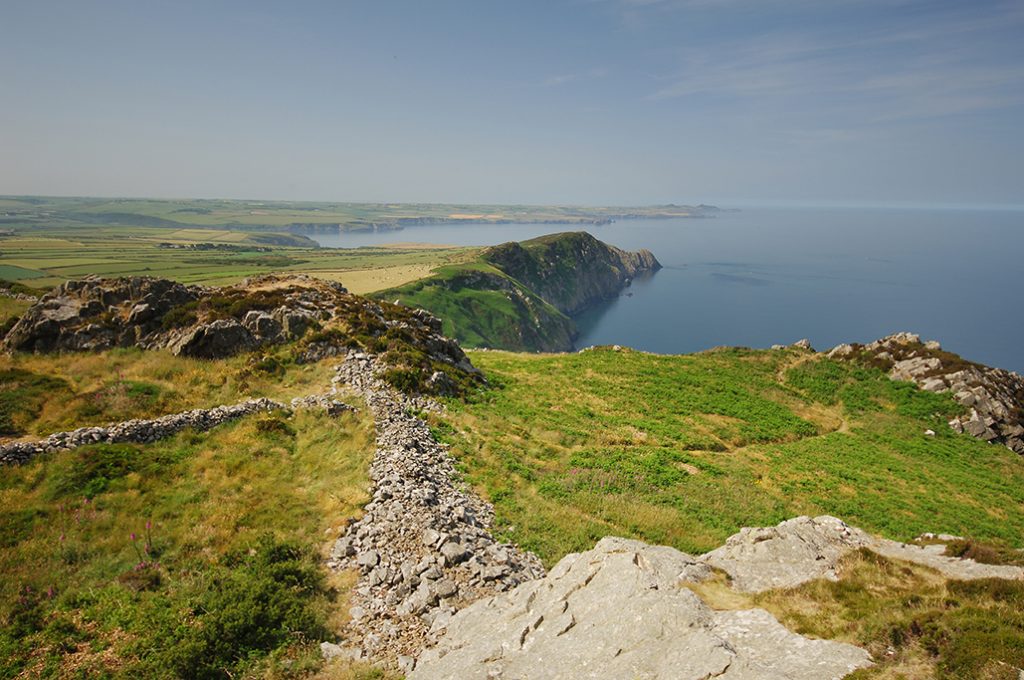 The parish of St. Nicholas, together with its village and surrounding farms, lies on the western side of the headland on the north Pembrokeshire coast known in Welsh as “Pencaer” and in English “Stumble Head”. The Pencaer headland is surrounded on three sides by the sea on the southern edge of St. George’s Channel between Wales and Ireland.  To the west is the parish of Granston and further west the parish of Mathry and most of the Pencaer headland lies within the adjoining parish to the east of Llanwnda.

The whole area has a long and varied history, some exceptional features of geological formations, evidence of early habitation and a rich religious, agricultural and cultural history.

The whole peninsula and adjoining areas to the south are part of the Ordovician rock formations, approximately from the time period of 470 to 440 million years ago. Most of the area lies within the Strumble Head and Goodwick volcanic areas being mostly igneous granite rocks, together with some mudstone shales.

The Ordovician geological timescale, lies between the Cambrian and Silurian geological periods. The Cambrian period was an era of marine conditions, and shallow seas in which much mudstone and sandstone materials were laid down, together with the fossilised remains of sea creatures. The Silurian period from approximately 440 to 400 million years ago, also produced much sandstone material and covers large areas of west Wales.  At the end of the Silurian period and running into the younger Devonian rocks very strong forces of mountain building episodes occurred known as the Caledonian Orogeny.  This produced huge metamorphic changes through temperature and pressure moving many of the rocks from a horizontal to inclined and vertical positions and substantial elevations to heights of many thousands of feet.

The Ordovician period was a mixture of major volcanic activity of eruptions, and intrusions. There were also mud deposits laid down in deep water which have become mudstones.  As a result of the heat and pressure, these are today deposits of slate. The volcanic activity occurred both underwater and above ground. The whole area was originally part of the early continental masses, of Avalonia and surrounding areas. These areas split and moved over millions of years by plate tectonics to the present positions on the western coast of Britain. The hills of Pencaer which we see today are the remains of the mountain ranges created during the Caledonian Orogeny as a result of the ancient continental masses pressing against each other. In the course of the hundreds of millions of years since that time natural erosion has left us with the jagged core material of these former mountains.

Among the outstanding geological features of the area are the following.

Over many hundreds of millions of years the whole area has been affected by erosion of water, wind, ice and heat.  A great deal of the erosion was caused by the numerous ice ages and intervening warmer periods, ranging from 150,000 years ago to 10,000 years ago, when the last ice sheets covering the Irish Sea and Britain melted.

The original land area adjoining the present day cliffs of west Wales and Cardigan Bay extended much further westward and is currently under water as a result of the melting ice and rising sea levels.  A particular feature of this erosion can be seen at low tide in various places along the north Pembrokeshire coast, particularly at Abermawr where the fossilised remains of the ancient forests lie covered by the sand. The western area of Pencaer has substantial sand deposits left by the glaciers.